It is a break from tradition at Wimbledon, but those pesky rain delays that have often marred the marquee center court matches should now hopefully be a thing of the past. 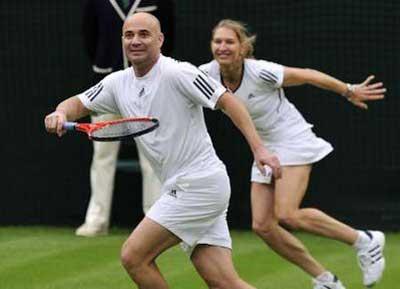 Andre Agassi of the U.S. and Germany’s Steffi Graf react during

their mixed doubles match against Tim Henman and Kim Clijsters

under the newly completed Centre Court roof at Wimbledon in London

thought she knew every nook and cranny of Wimbledon and

considered it to be her personal backyard. Looking forward to a

trip down memory lane, she jumped at the chance of teaming up

unveiling of the new retractable roof over Centre Court. To match

The All England club has set up a new retractable roof covering centre Court. To test the new “indoor court”, the husband and wife pairing of Andre Agassi and Stefanie Graf were invited to an exhibition match.

Measuring 5,200 square metres and weighing 1,000 tonnes, the new roof takes a little under ten minutes to close. Singers…helping to mark the occasion, meanwhile, tennis fans snapped up the chance to see the former stars take part in the mixed doubles. The pair whom Agassi and Graf took on were British favourite Tim Henman and Kim Clijsters of Belgium. Graf showed her volleying prowess…and then earned a kiss from her adoring husband.

When Agassi played long after a marathon match point, the Briton and the Belgian took victory by seven games to six.

Henman and Agassi then went head-to-head in singles. There, Agassi was able to come out on top as he seals a 6-4 victory over Henman with a powerful forehand pass.